The Anti-Racism & Cultural Diversity Office launched a drop-in program in the fall of the 2013/14 academic year called “Unfiltered: Truth Talks”- a safe space for students to engage conversations around race, racism, ethnicity, culture, creed and the intersections among them, inside and outside of the classroom. The program is peer facilitated and is an opportunity for students to support each other and find community amongst those with similar lived experiences. Some past discussion themes include:

Students have responded quite positively to the development of this space; noting the lack of opportunities to have these conversations elsewhere on campus. Participants have asked to have more discussions in which various intersectionalities are discussed (i.e. the intersections between race, faith, gender and sexuality) as well as more discussions around anti-racist strategies. Peer facilitators will continue to seek feedback and source discussion themes from students in hopes of encouraging students to place a stake in the program’s success.

Challenging Islamophobia: How we can be allies when confronted with racism 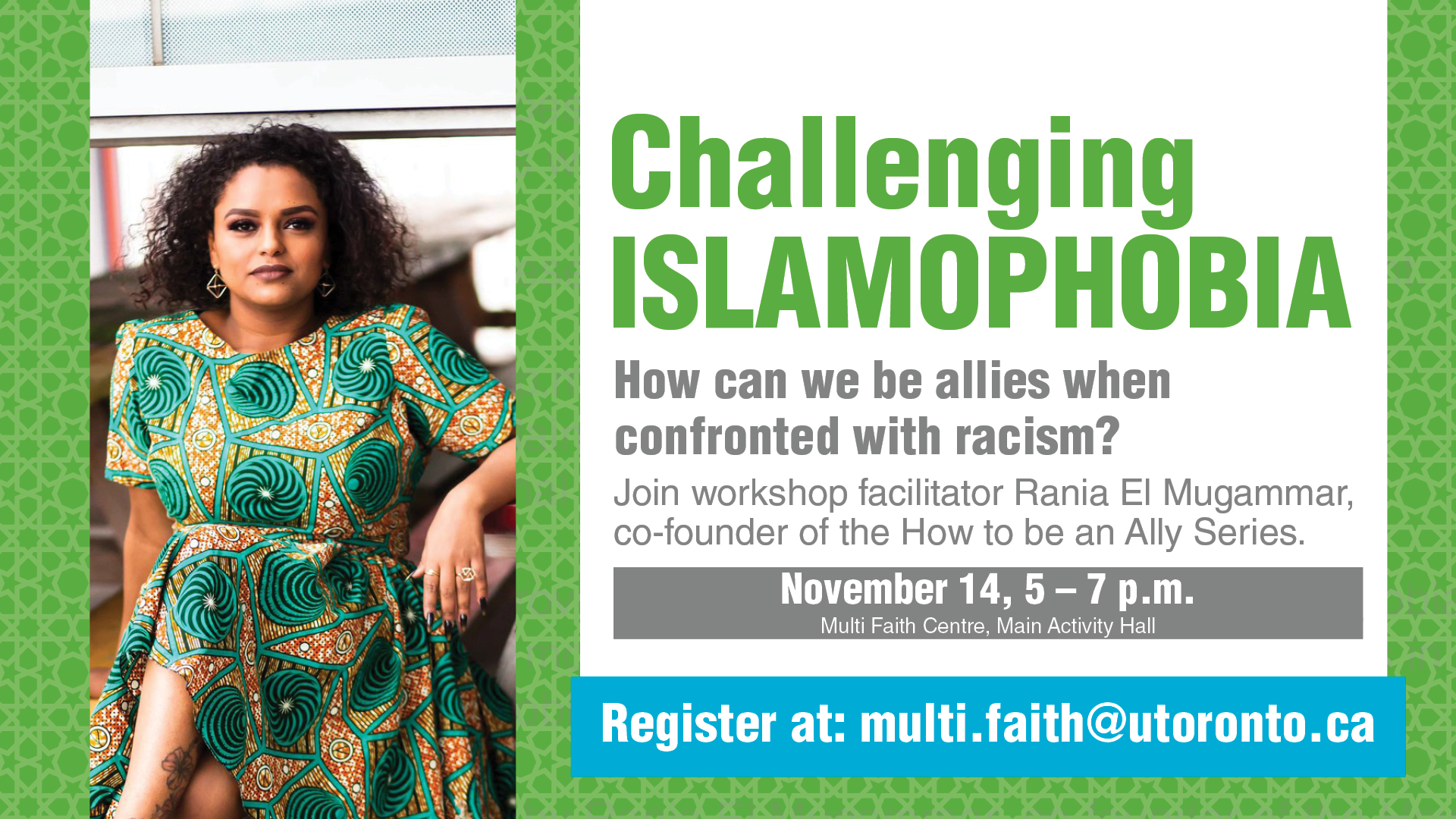 Do you find yourself wondering “What is Islamophobia”? Have you seen instances of Islamophobia and wondered what you could have done? Do you want to understand more about Islamophobia, and most importantly, do you want to learn how to become an ally in the face of Islamophobia? Join us on November 14th at the Multi-Faith Centre from 5PM-7PM to discuss these questions and issues in a safe, friendly environment!

This session will be led by Rania El Mugammar, an experienced anti-oppression, equity, inclusion and liberation educator and consultant who is unflinchingly committed to decolonization and freedom as the ultimate goals of her work. In addition to working extensively with a range of institutions from enterprises, education institutions and collectives, Rania’s work has also been featured in Canadian media outlets like CBC, Toronto Star and CTV. More information about Rania can be found at http://raniawrites.com

This workshop is a collaboration between the Multi-Faith Centre, Anti-Racism & Cultural Diversity Office, The Muslim Chaplaincy, Muslim Student’s Association, and Discussion of the Quran. 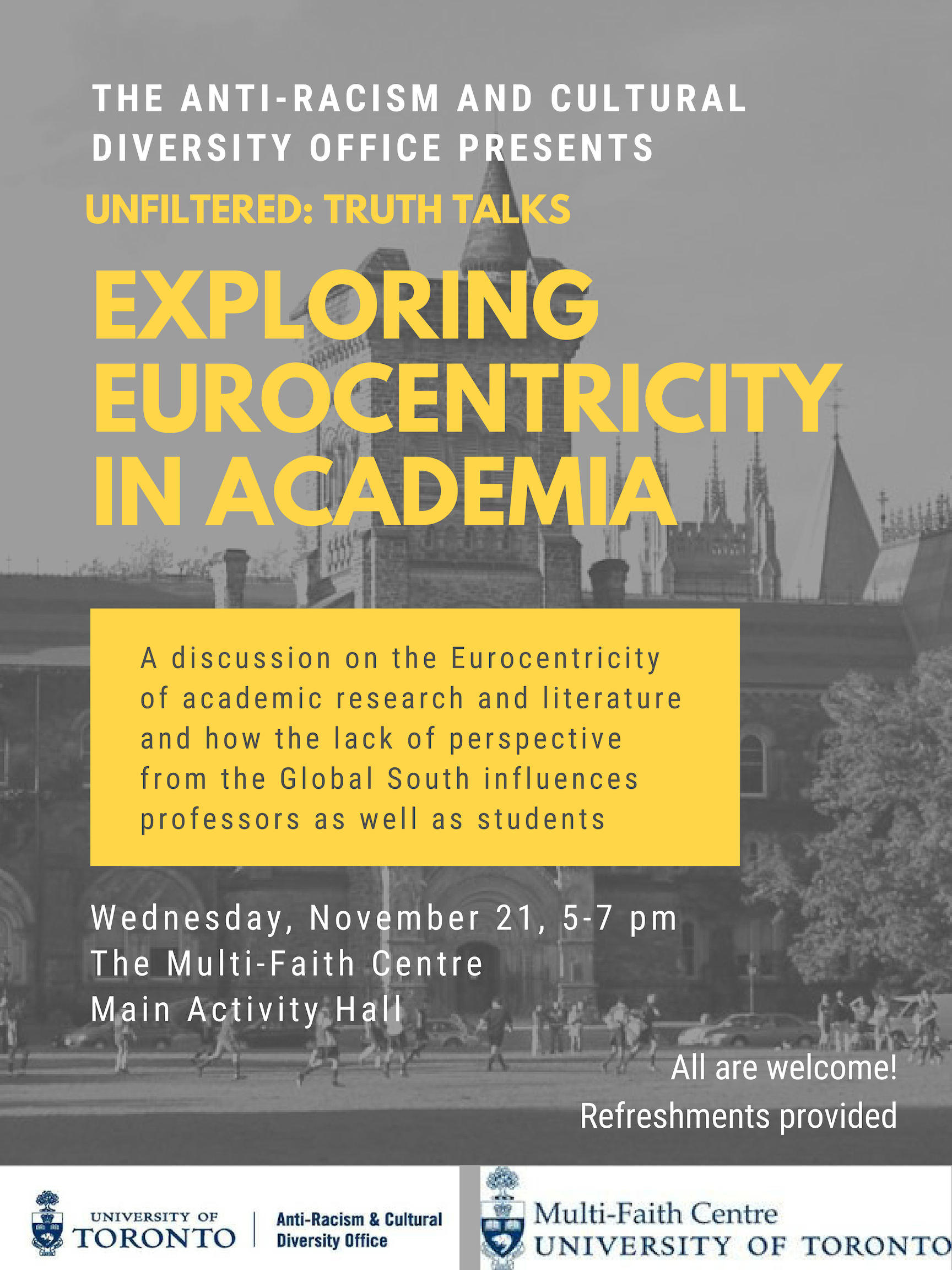 A discussion on the Eurocentricity of academic research and literature and how the lack of perspective from the Global South influences professors as well as students. 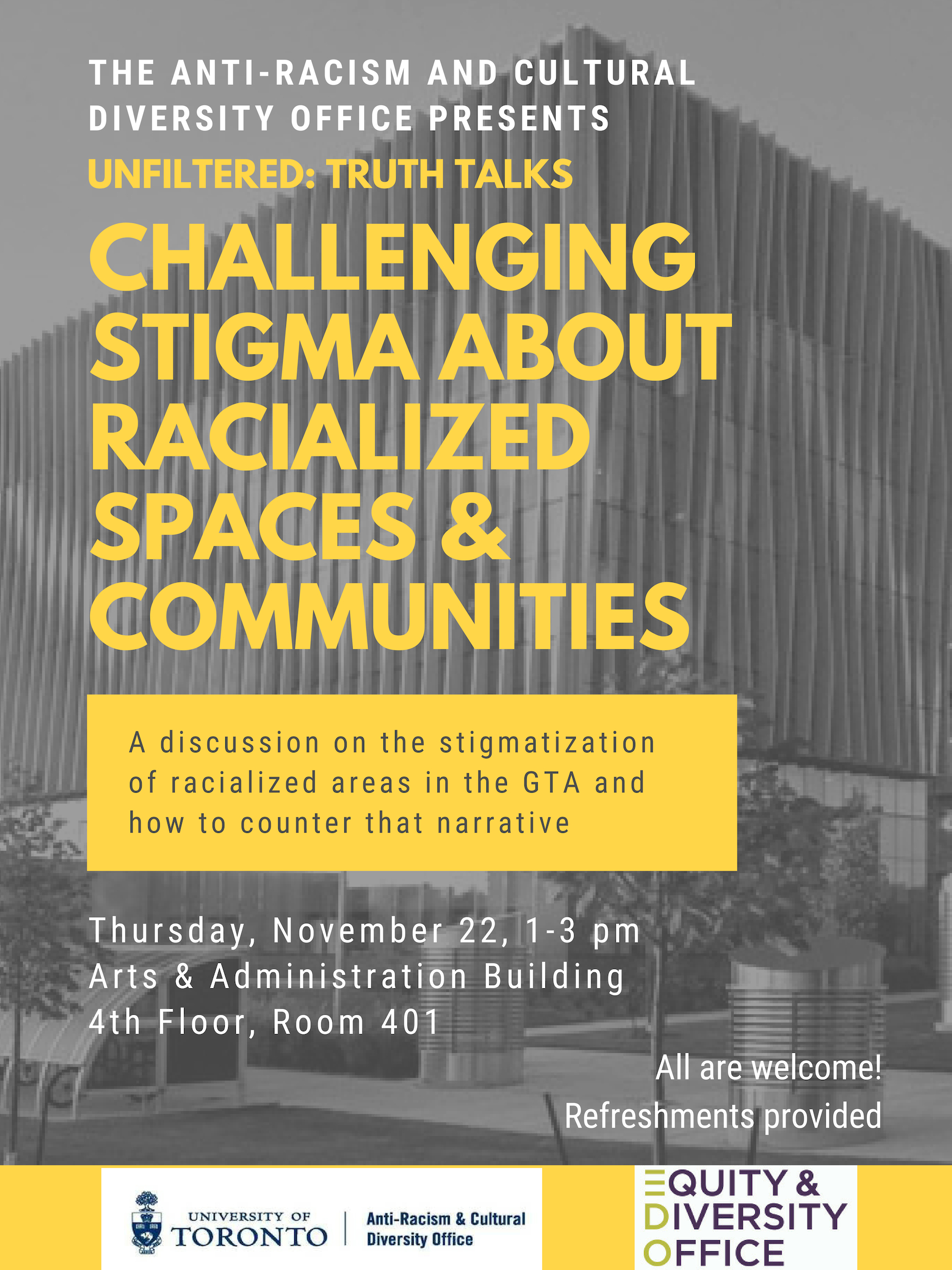 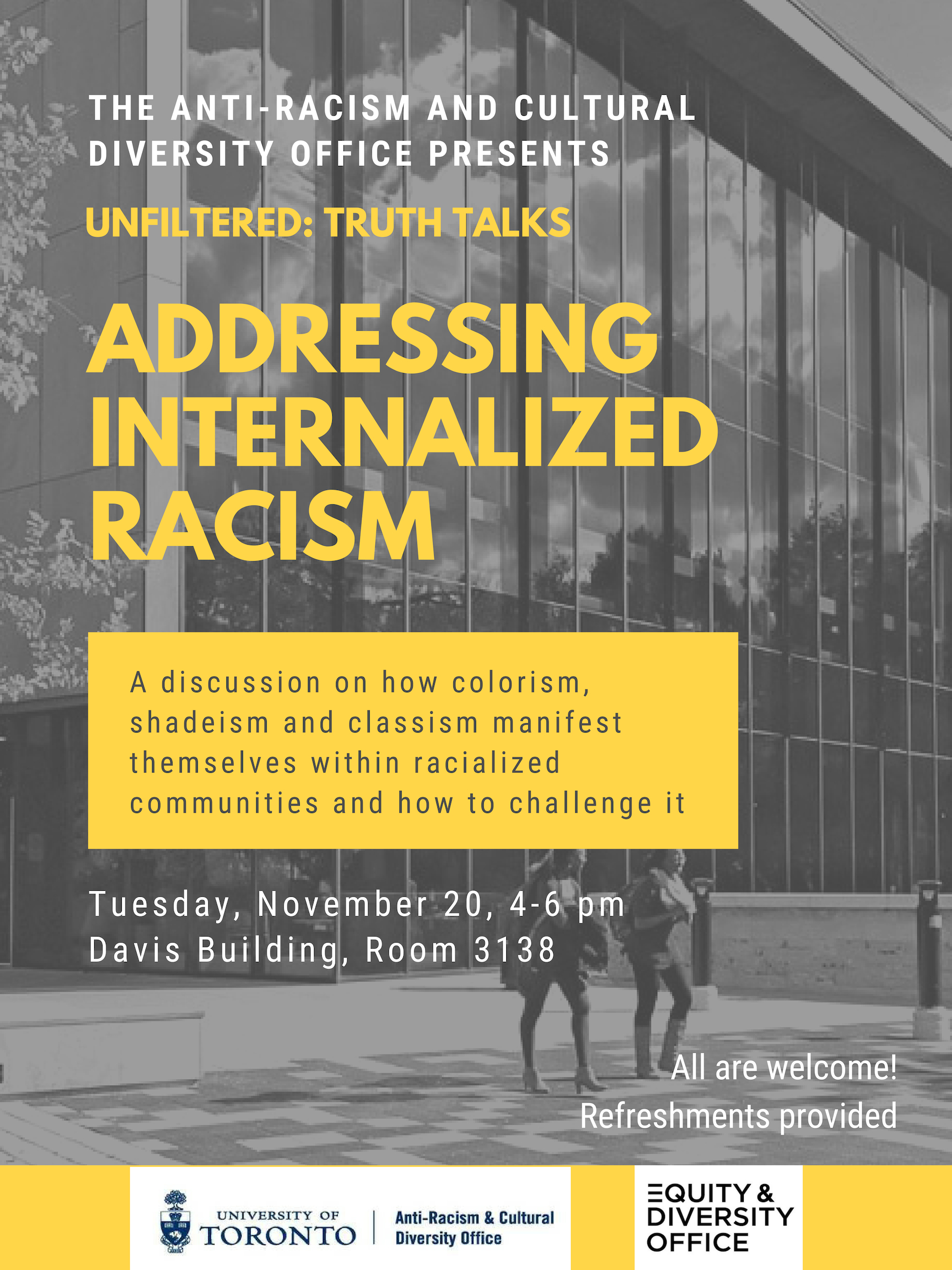 A discussion on how colorism, shadeism, and classism manifest themselves within racialized communities and how to challenge it

White Supremacy and the Alt-Right: Community Leaders and Our Response to Hate Groups in Canada

With recent attacks on targeted minorities, including the murder several weeks ago of 11 Jews in a synagogue in Pittsburgh, we must look more closely at both historical white supremacy and its manifestations today. Canada is not immune: Reported hate crimes in Canada rose 47% between 2015 and 2016. White nationalist Toronto mayoral candidate Faith Goldy received over 25,000 votes. Why is white supremacy reappearing in Canada? Is it possible for riots like Charlottesville’s to appear in the streets of downtown Toronto? Panelists will discuss hate crimes and the alt-right on a campus, municipal, and national level, as well as community responses from the Jewish, Muslim, First Nations, and Black communities, among others.

Dessert reception with pastries, coffee and tea will follow the event to continue the dialogue. Co-sponsored by Hillel UofT, The Anti-Racism and Cultural Diversity Office, the Multi-Faith Centre, and Hart House.